Before I start telling you about the new stuff I'm working on I thought it was time to show what I've finished.  Not quite sure if my UFO list is getting any smaller though. The first quilt is for my son ( 15yo ) He is as skinny as a rake and loves cuddling up in his quilts.  However a couple he has got are a bit babyish for him now so I decided a new one was in order. Here is the centre of the quilt. Many different blues for the asterisk blocks with scrappy red squares inbetween.  These asterisk blocks are a LOT of work and took a long time to make.  Once I got to this stage I stepped back and decided it was just not working - way too much red.  The quilt sat for a while until I figured out what to do with it.  I didn't really want to waste all that time. I tried to find a border fabric to tone down the red but was unsuccessful. 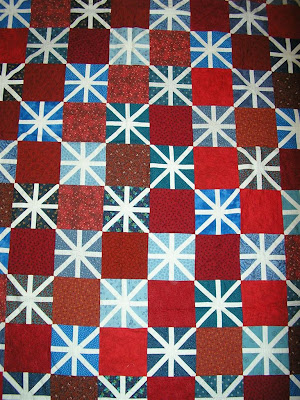 So I decided to cut up the blue fabrics I had left ( leaving out the lighter ones) I made them the same size as the blocks and laid them round the quilt.  It needed something else and so the bright aqua border was auditioned and whaddyknow ? Success ! Or at least I thought so :-) 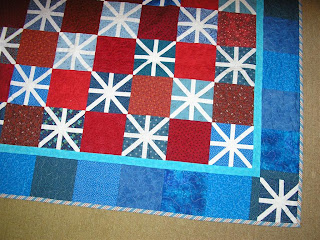 Here is the finished quilt. It has Patricks seal of approval. 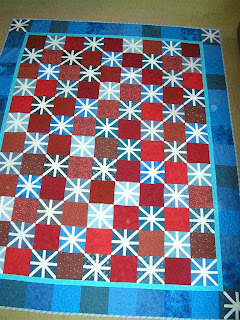 Next up was my little house quilt that I started at the beginning of the year -  this was an idea from Jeanneke - her idea was a quilt-along where everybody made 1 house a day for a whole year. I knew I did not want to make this many and so stopped when I had enough for a wall quilt. These were all made from my scrap box and were mainly hand pieced from templates. really good fun and I adore this quilt. It will be going on my wall when I get a sewing room sorted. 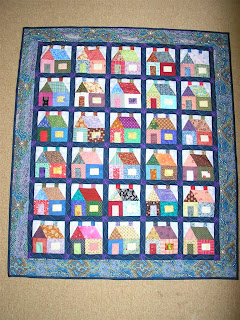 Here is a close-up of the lovely border fabric which just begged to be added to the quilt.  I had bought it a few weeks previously with no plan in mind and there it was ready in my stash. 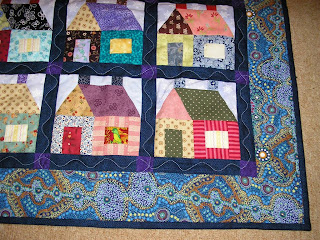 This post has taken ages to write as I think blogger is having an off-day - my photos keep disappearing and moving about so I just hope this publishes alright.

I'll leave you with the start of something that I'm having a lot of fun with - stay tuned... 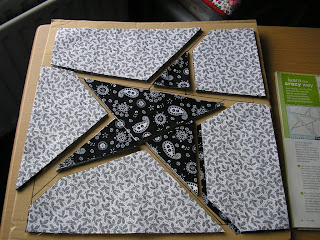 Nearly got all my problems sorted - thank goodness - so will be back very soon with lots of news. The winner of my little giveaway has been picked and I already have her address so a little parcel will be on it's way this week. Could it be you ? lol

And because I don't like to post without a photo here is Jess's birthday cake I recently made. 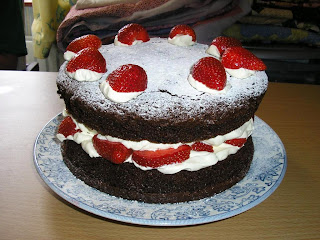 I have been on a bit of a mission to find a great chocolate cake recipe and think this is THE one. Not dry, not overly sweet and a fantastic texture.  Definitely a winner :-)