I'm still plugging away on those Wheel of Fortune blocks. I can see why it became a UFO - those little pointy bits are seriously fiddly. Not sure when the quilt will be finished but at least progress is being made - albeit slowly. One things for sure no progress was being made when it was stuffed away in a box...
Now a little story. I very rarely buy a full range of one fabric. I am a scrappy quilter and love using allsorts of bits from here and there. However now and again a certain range shouts out at me and I have serious fabric envy. Because fabric prices are really expensive in my neck of the woods thats usually as far as it gets. Recently though I bought a small pack of Bliss by Bonnie and Camille for Moda and absolutely loved it. I know this range was out last year so thought I had no chance of getting any more.
I was browsing around on Ebay.com and discovered an auction for the full fat quarter set of Bliss and thought - why not ! One little problem was that the seller would only ship within the US. So I enlisted the help of my lovely friend Gail ( trailteach.blogspot.com ) -blogger not letting me do links - who very kindly agreed to let me have the fabric shipped to her and then she would post it over to me.
So I waited up til 1am on the end of the auction and some frantic bidding later I won - hurray. Very tired the next day but I was so pleased it was mine. I emailed the seller Gails address and just asked him to confirm he would be sending it there and not to my address that was registered with my paypal account. All well and good he replied that it was fine.
Gail was on standby to receive the package and said she would let me know when it arrived. Days passed - then a few more - then a few more. Well time was getting on so I decided to get in touch with the seller after Gail confirmed it had not arrived.
I sent a very polite email asking if he could let me know the date he had shipped it so I would know when it was coming. I had no reply. So a couple of days later I sent another and this time I got an answer. He was really sorry but had made a mistake in re-listing the bundle when in actual fact he did not have it to sell. He said he had sent me a message the previous week when he had refunded my money. Whaaatt ? I had neither and told him so. I was very cheesed off at this point and thought I was going to have some fun getting my money back. I had paid him practically a hundred dollars ! I went to bed feeling very disgruntled. However by next morning he had refunded me.
I'm not sure what would have happened if I had not gotten in touch - 3 weeks after I paid him I had my money back but no fabric. Very sad - I had such plans for this fabric. Ooh the quilts I have made with it in my head is nobodys business - lol !
Here is a photo from the web of what I haven't got - waaaa. 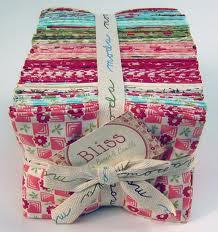 Well my sewing marathon was brilliant - I can certainly see where all my time goes. When it was just me to see to I had so much time to play with fabric. I lived on salads and did the absolute minimum of housework and sewed until whatever time I wanted. I was really glad to see my boys home but it was fun. Wouldn't like it too often though - lol !
Anyway the upshot was I got most of the twin quilts pieced and in the days after I did the applique names panels - then onto quilting and binding. Here is Cherry's quilt. 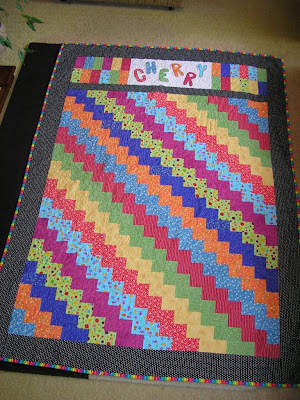 And here is Pepper's 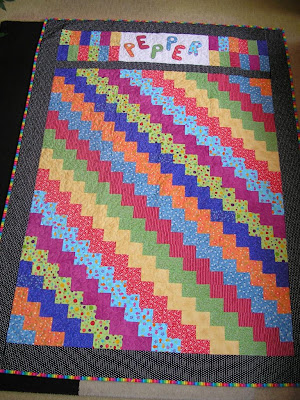 Unusual names I know - seems to be the thing with the younger parents. I have seen photos and they are beautiful little girls.
A little close-up of the fabrics and the black polka dot stuff hat I added to tone down the brightness. When DD Jess said she wanted bright and colourful I took her at her word - lol ! 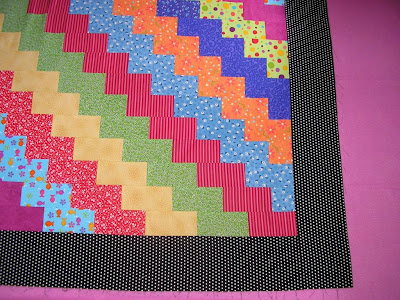 And look at this stripey fabric I used for binding - it is an older fabric and I just knew it would come in handy at some point. 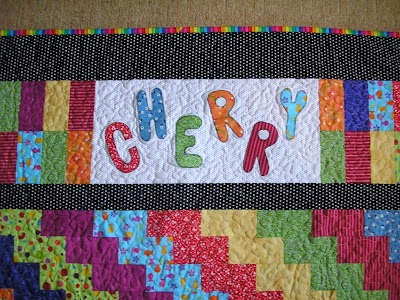 As an added bonus I had overcut the brick shaped pieces and had enough to use ( along with some kitty fabric ) to make 2 quilts for Project Linus. These are finished too. 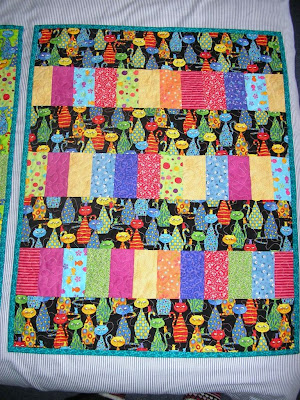 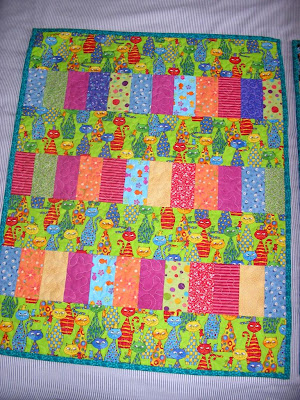 Now they're done the relief is brilliant. Jess attended the baby's christening but none of the gifts were opened at the time. However later on the baby's Mum sent Jess a lovely text to thank her for the gifts and to ask where on earth she had gotten those beautiful quilts as they were just amazing. She said her husband was speechless when he saw them - so of course that made it all worthwhile. Jess is apparently going to "pay" me for making them but not seen any cash yet - lol ! All fabric was from stash so I have just said I will give her them at cost price - haha. She would fall in a heap if I charged her what they're really worth. She is a good girl and I was pleased to make them for her to give her friend so it's all good.
Anyway I have been doing all sorts of other bits and pieces but last night I was really tired and instead of my usual couple of hours handsewing I started flicking through some magazines. Saw a lovely quilt in one of them which got my brain whirling. It was called Wagon Wheels and as the name suggests involved circles - I love circley things - lol ! Well before I got myself in trouble by starting something else I went rootling in my various boxes and baskets and dug out a UFO. Started over 4 years ago I think. It is called Wheel of Fortune. I sent to US for templates from John Flynn and used a pack of fabric from eBay. Can't remember fabric name - tropical jungle or something. I made 1 block ( nearly ) and because the inner didn't fit the outer properly I lost interest and stuck the whole lot in a box and that's where it's been ever since. Here is the almost completed block 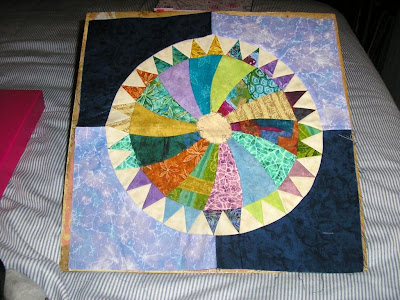 And I also had another 11 of these inner bits done but without the spikey bits added. I think the trouble was my seam allowance was too big and there was a lot of fullness to ease in and it doesn't look very good. 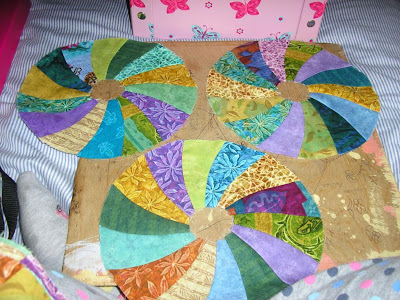